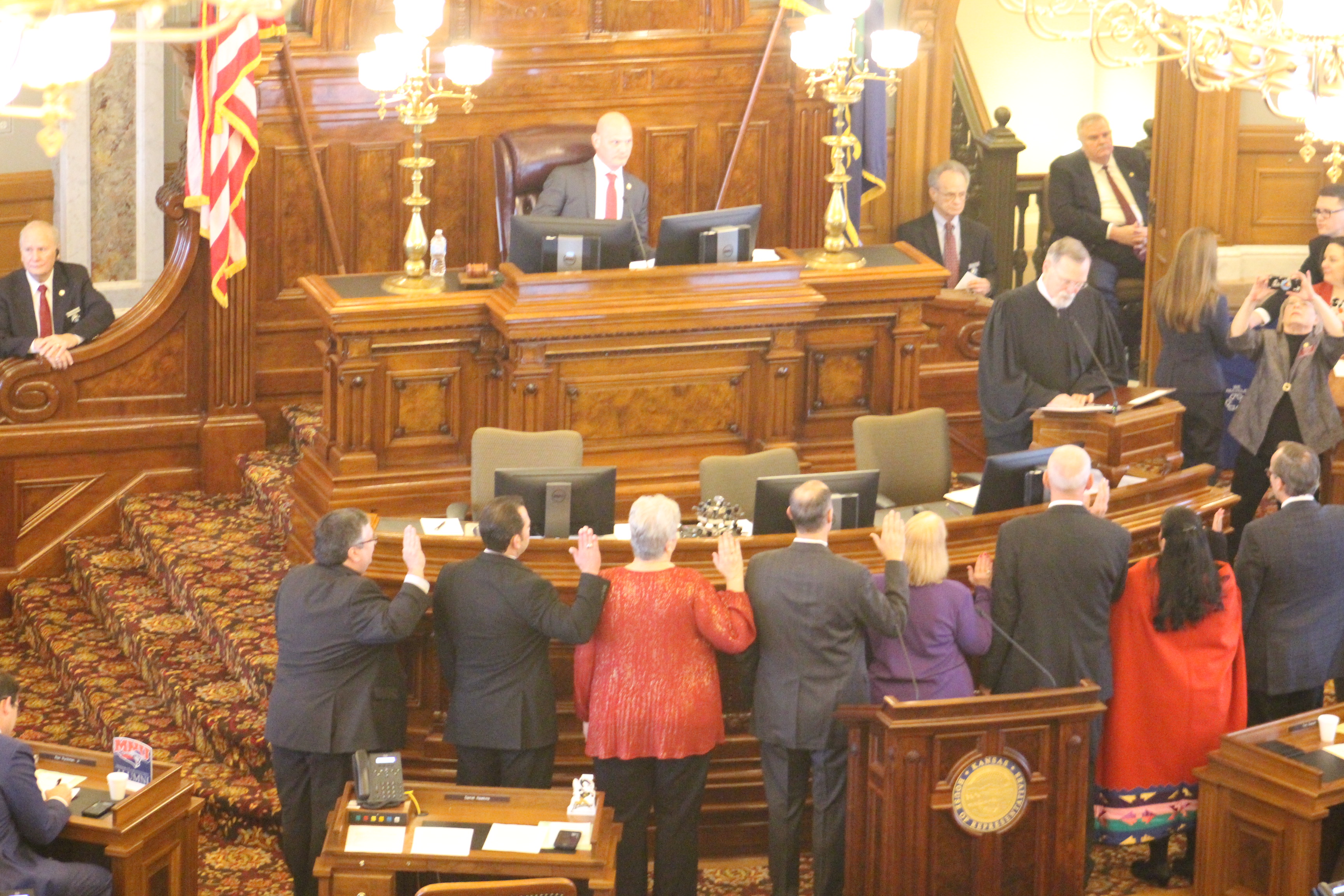 Hello from Topeka! Welcome to the 2019 Session.  The first day was filled with pageantry and ceremony of the inauguration of Laura Kelly as the 48th Governor of Kansas along with the swearing in of all 125 members of the Kansas House of Representatives.   This year I will serve as a member of the Appropriations and Taxation Committees and will be Chairman of the Higher Education Budget Committee.

Also last week, Governor Kelly delivered her first State of the State address and budget proposal. It is a one year budget that she says can be handled without a tax increase. I will work with her to craft a budget that provides for the needs of our citizens and does it is a fiscally responsible manner.

Division of the Budget Director Larry Campbell provided details on the Governor’s Budget Report (GBR) to a Joint Committee of House Appropriations and Senate Ways and Means.  The GBR can be found online at budget.kansas.gov. Some of the highlights include: A one-year budget for all state agencies, with the exception of K-12 and the biennial budgets (Fee Boards), which are budgeted for two years.  The K-12 budget is actually for two years and is proposed as a standalone piece that she would like to see enacted by the end of February in order to satisfy the Kansas Supreme Court.  Although many of us want to see meaningful legislation discussed and passed early in the session, it will be a heavy lift to go through all the steps by the end of next month.  Not only is the K-12 budget separated out, it includes an inflation rate of 1.44 percent from FY19 through FY 23, this would be an increase of $363.6 million.

The long term plan call for the ending of State Highway Fund transfers by FY’23, but there are $238 million in transfers from the fund to the State General Fund in her proposed budget.  The Governor’s Budget does not address comprehensive transportation funding. There is also money for Medicaid Expansion and the Children’s Health Insurance Program known as CHIP.  The federal government is reducing its participation in the CHIP program so if we want to keep this level of coverage, this is what is will take.  Another proposal is to pay of the Pooled Money Investment Board (PMIB) loan 5 years early, requiring a revenue transfer of $264.3 million SGF to fully pay off the $317.2 million loan in FY 19.   While this is a noble idea, and I would like to see it happen, we may need to stay with the original payback terms. The GBR also restores remaining FY 17 SGF allotment to the Board of Regents in FY 2020 at a cost of $8.9 million.

One proposal has received a lot of media attention and that is the reamortization of KPERS.  I have also received many emails and phone calls regarding this issue:  Reamortizing the unfunded actuarial liability over a new 30-year period would cost the taxpayers of Kansas an additional $7 billion with a short-term “savings” of $145 million.  This is not a partisan issue, Governor Brownback proposed this also in a previous budget and it was soundly rejected by the legislature, I assume this time around it will not be well received by members of the house and senate.

There is more to talk about, we will do that next week. It is always good to see people from the district come to the  capitol. Leah David from Norton and Jaden Smith from Almena were in town for a Citizenship Day through the Career Technical Student Organizations of Kansas. These young ladies are also NW KS FFA District officers.

I look forward to seeing you around the 110th District. It is my honor to by your representative.