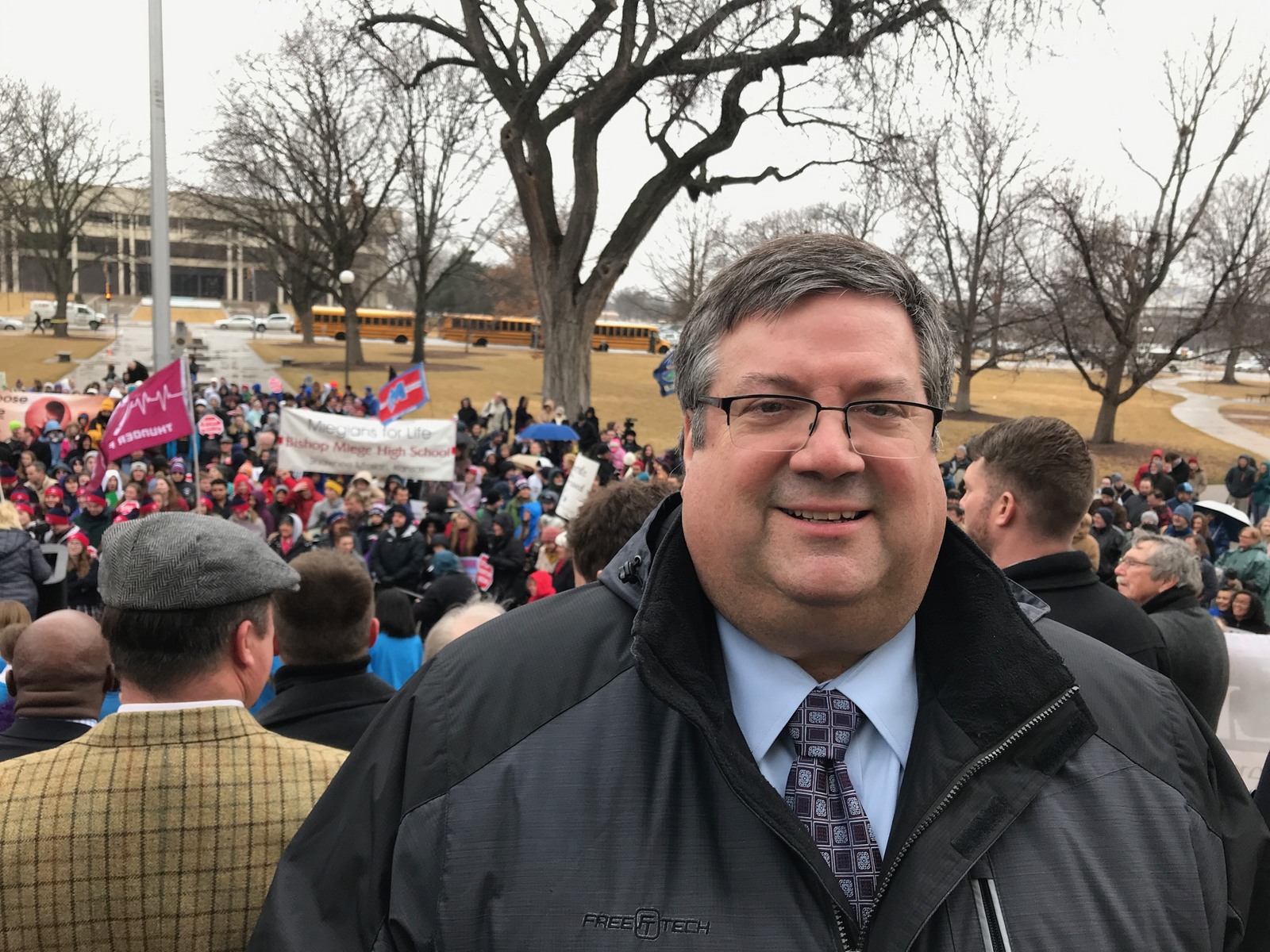 Hello from Topeka! There hasn’t been a lot of activity, which may not be a bad thing.  I was proud to be on the Capitol steps on Monday for the Rally for Life. It was good to be with so many legislators, other elected officials and people from across Kansas, standing and supporting the unborn.

One of the issues that has garnered some attention in transparency.  This week at least one bill has been introduced to make the legislative process more transparent.  Over the years, the legislature has invested dollars into giving access to those outside of Committee rooms to hear what is going on. In fact, the 2018 Session will be historical in that all Committee rooms are audio live streaming meetings. In addition, the House chamber is set to be video live streamed this session.  Currently, there is a temporary camera that allows for viewing after the daily session is completed.  A permanent camera to show the session live should be in place in the near future.  The Speaker directed that Committee Chairs implement the following transparency measures.  Bills requested for introduction must have an RS#, meaning the proposed language must be prepared by the Revisor’s Office before being brought to a Committee.  In addition, the Committee minutes will reflect who requested the bill, such as the individual and in some cases, the organization that they represent.  The Speaker is currently working with legislative staff on a request to have each individual bill’s webpage have a notation as to who requested its introduction.

Also, current legislative practices provide more transparency on the Legislature.  Committees provide public hearing notice, which is posted both in the building, emailed to distribution lists, and placed in the daily calendars.  The Legislative process is more transparent with lobbyists and the press reporting daily on social, print, and television.  Many of the state’s largest newspapers have a daily presence in the Capitol, including the Kansas City Star, Wichita Eagle, Topeka Capital-Journal, Hutchinson News, and the Lawrence Journal-World.  And, many local newspapers publish articles and columns from legislators and other interests. Many of the television media stations also cover the Capitol.  Other organizations provide legislative updates that reach a broader audience, including the Associated Press, Kansas Public Radio, Kansas News Service, and Hawver’s Capitol Report.  Lobbyists reflect a variety of constituencies in the Kansas, from social workers to small business, and to more generally, taxpayers. You can also call or email me and I will share what is going on and explain the process if you have questions or concerns.

Along with the State of the State, one of the other annual events which takes place in the early days of the legislature is the State of the Judiciary Address. On Wednesday afternoon, Kansas Supreme Court Chief Justice Lawton Nuss addressed the Legislature.  He reiterated the need to increase funding for the judicial branch and touched on other points he had stressed during the previous State of the Judiciary.  In the Judiciary’s budget, they requested enhancements of $19.6 million—that request was not included in the Governor’s budget.  This includes a request to construct two new Court of Appeals judicial suites and to improve judges and support staff salaries.  The Chief Justice also outlined the benefits of e-filing and their long-term eCourt plan, which was first conceived in 2011 and has improved case processing and operational efficiency for the branch. It does not look to promising for his request to be approved, but as in years past we will work for finding ways to show appreciation in the form of enhancements for the support personnel of the judicial branch.

Another issue that is moving slowly through the process is hemp. Last week, the Health and Human Services Committee held an informational hearing on hemp CBD oil.  Officials from the company Folium Biosciences, based out of Colorado Springs, CO, spoke before the committee, described their products and explained their business model.  They also articulated that the they grow hemp that has been bred to contain high levels of CBD (cannabidiol) and THC (tetrahydrocannabinol), of which such oils contain less than 0.2% THC upon extraction.   The Folium Bioscience officials claimed they grow “medicinal hemp,” that THC is the only psychoactive agent found in nature, and with their selected breeding process they have lowered the THC traces found in their products to a marginal level.  They also argued that CBD oil is an opportunity to help veterans with PTSD/PTSI and other individuals suffering from Dravet syndrome. It seems there are three groups when it comes to hemp, those who want to research it, those who want to grow it now and those who want nothing to do with it.  We will see if it goes anywhere.   I do not believe the issue of legalizing recreational marijuana use in Kansas will come up, however there may be an attempt for medical marijuana, but I don’t think either have the support to move forward.