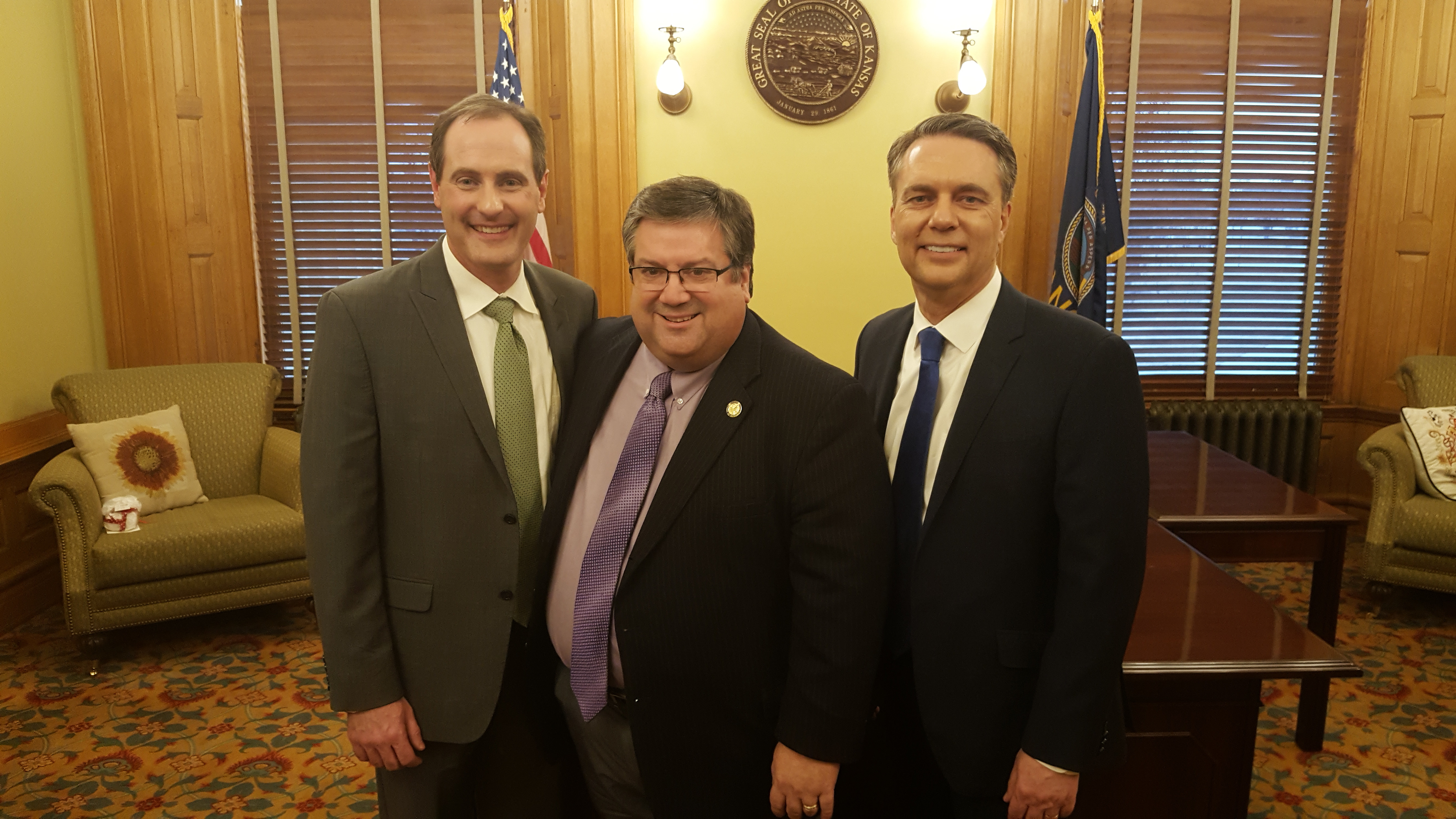 Hello from Topeka!  This is the final week of the first “half” of the 2018 session, the two-minute warning if you will.   This is the week when bills need to be passed out of their original house of origin and then they will go to the other for further consideration.

One of the most asked questions around the dome has been who will be the new Lieutenant Governor?  Well, we learned on Tuesday evening that Tracey Mann was announced as Kansas’ 50th Lieutenant Governor at the Kansas Livestock Association Legislative Social & Dinner event at the Capitol Plaza Hotel.  Lt. Governor Mann is a fifth-generation Kansan from Quinter, Kansas, and earned a degree in Agricultural Economics from Kansas State University in 2000.  He currently serves as the managing director and principal of Newmark Grubb Zimmer, a full service real estate company headquartered in Kansas City and is a board member of the City Teen Center in Salina.  Previously he served on the boards of directors for the Kansas Agriculture and Rural Leadership program and the Kansas Chamber of Commerce.  Mann, his wife, Audrey and their four children live in Salina.

Over the weekend, the Kansas Republican Party Convention takes place this weekend in Wichita, the highlight was the Inaugural Gubernatorial Debate late Saturday evening.  The debate panel included: Wink Hartman, Mark Hutton, Secretary of State Kris Kobach, and Insurance Commissioner Ken Selzer.  Unfortunately, Governor Jeff Colyer became ill on Saturday and was unable to participate. Overall, I thought they all did well, and I am looking forward to the remaining debates before the August primary.

Some of the highlights as committees wrapped up their work for now included: The Corrections and Juvenile Justice Committee heard a several bills, most notably HB 2581, which would institute harsher penalties for those who engage in “swatting.”  Swatting takes place when an individual makes a call to law enforcement, SWAT, or other authorities requesting emergency assistance, when there is no assistance needed whatsoever.  Specifically, those who make these false calls typically request assistance at an address other than their own (could be completely random as well).  Recently in Wichita, Kansas, a prank call led to the deployment of law enforcement at a residence, which ultimately led to the fatality of the home owner, who had nothing to do with the call or the individual who made that prank call.  Another instance occurred in Overland Park, Kansas, in January, however no one was injured at that time.  The bill outlines various sentencing levels, should an injury or fatality occur, as a result of the emergency response of such false alarms and prank calls.

The House Taxation and Senate Assessment and Taxation Committee met jointly to hear about the impact of the Federal Tax Cuts and Jobs Act, which was signed on December 22, 2017.  The Committee heard from Kathleen Smith and Michael Austin from the Department of Revenue and Jay Langley, on behalf of the Kansas Society of CPAs.  The Department of Revenue estimates that there will be a positive fiscal impact to the State, with additional taxes paid by taxpayers: $137.8 million for FY ’19; $179.9 million for FY ’20; and $187.7 million for FY ’21.  The Department and Langley summarized the changes affecting individual and business tax provisions and the effect on taxpayer liability.  They noted that the information provided is preliminary and for informational purposes.  According to Chairman Steven Johnson, “This (briefing) identifies the magnitude of issues we have to review regarding the tax changes. There is no free money.  We need to confirm if we wish to have these changes (which is effectively a tax increase) continue into effect on our taxpayers.”