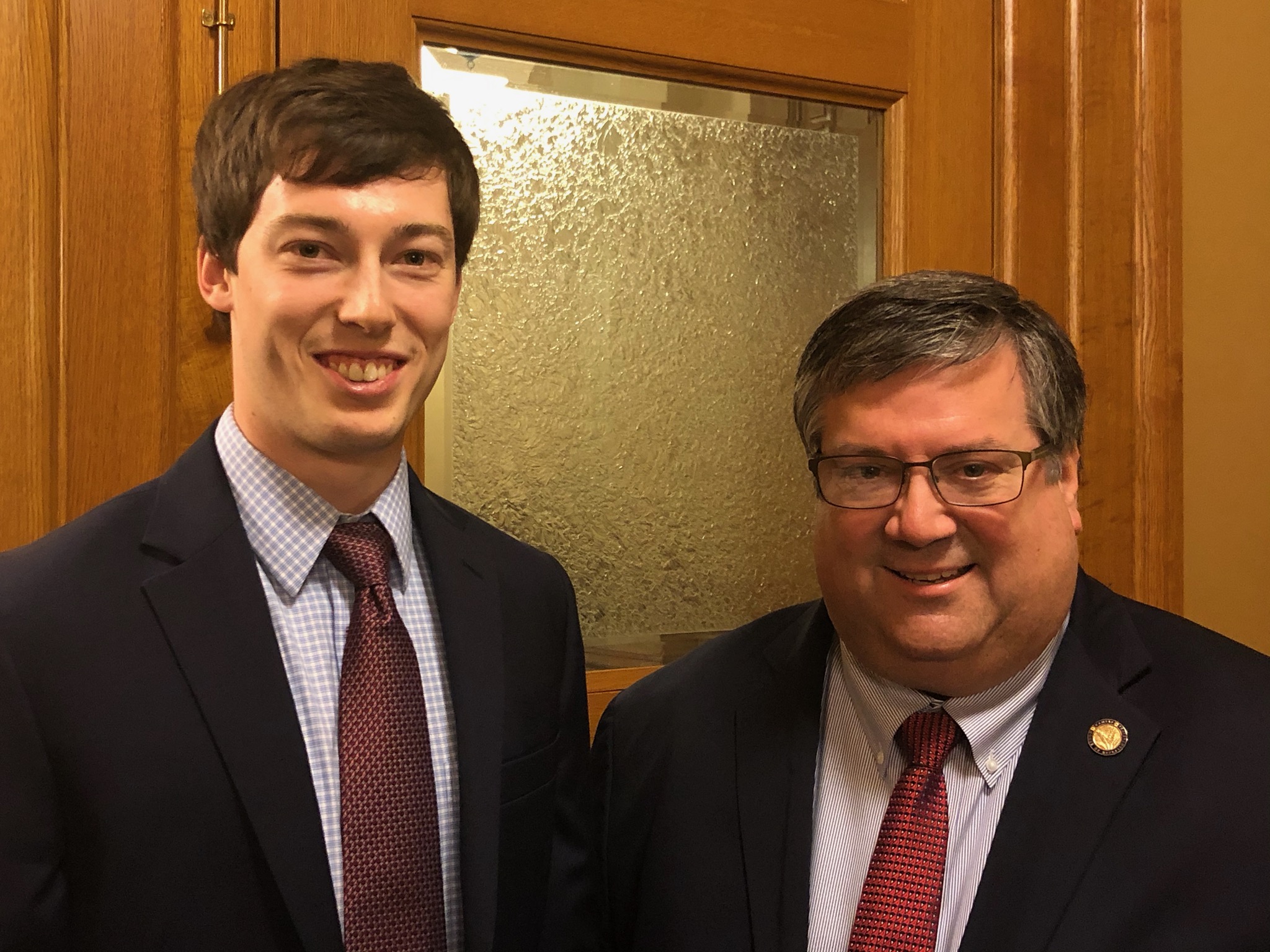 Hello from Agra!  It is good to spend a couple of days back in the district as we get ready to begin the “second half” of the 2020 legislative session.  Last Friday, Senators Bellinger and Bowers and I held town hall meetings in Ellis, Palco, Phillipsburg, Norton and Hill City.  We had great turnouts and folks were engaged with questions and concerns about state government.  Thanks to the county farm bureaus and other local sponsors for making these stops successful. Last week, we had Evie Vance and Ayston Kats, sixth graders from Norton serve as pages, they learned about state civics and I think had some fun, plus they were some of the first to eat from the new concession area located on the ground floor of the Capitol. It was also good to catch up with Phillipsburg native Stephen Sage, who stopped by with a group of pharmacy students from the University of Kansas, plus the folks from Northwest Library System in Norton were here to advocate for libraries in their area.

On Thursday, last week, the Legislature officially reached its halfway point, known as Turnaround Day. Turnaround marks the last day for non-exempt bills to be considered in their house of origin. That means the House’s focus is shifted primarily to working bills that were passed by the Senate during this first half of session, while the Senate takes up bills that were passed by the House.

The House debated HB 2503 last week, which was Governor Kelly’s plan to increase state debt by $4.4 billion by reamortizing the KPERS retirement plan. During the debate, Rep. Jim Kelly from Independence proposed an amendment to strip the Governor’s reamortization plan from the bill and instead continue down the fiscally-responsible path of paying off current debt.  The amendment passed on a bipartisan vote of 125-0 with every Republican and Democrat voting against the Governor’s plan.  Besides increasing the state’s pension debt by $4.4 billion, the Governor’s plan would have kicked the can down the road, delaying payoff of the state’s KPERS debt by another 10 years.

The Pew Charitable Trust, a nonpartisan public policy organization, analyzed the Governor’s remortization plan. In their findings to the Legislature, Pew stated: “this type of adjustment results in short-term budget relief by extending the payment period, but also has the effect of increasing expected costs over the long-term … reducing pension payments would slow the progress on positive amortization.”

HB 2503, as amended, will fully pay the states deferred KPERS obligations, ultimately saving the state $209 million in interest. The bill has been sent to the Senate for consideration.

Also, last week the House overwhelmingly passed HB 2516, legislation enacting First-Time Homebuyers accounts on a vote of 123-2. The bill encourages individuals to set aside funds for costs associated with the purchase or construction of a first home. Structured like 529 college savings accounts, contributions to the savings accounts are tax deductible. Communities can also establish the accounts to attract professionals to make the move to their community.  During debate on the bill, the House added an amendment to have annual reports made to the Legislature on the implementation and usage of the tax credit provided for in the act. The bill has been sent to the Senate for consideration.

As we get back to work in Topeka, the anticipation is work will continue on the budget, taxes and the Governor’s Executive Reorganization Orders is anticipated. The Legislature’s next deadline is First Adjournment on April 3rd.