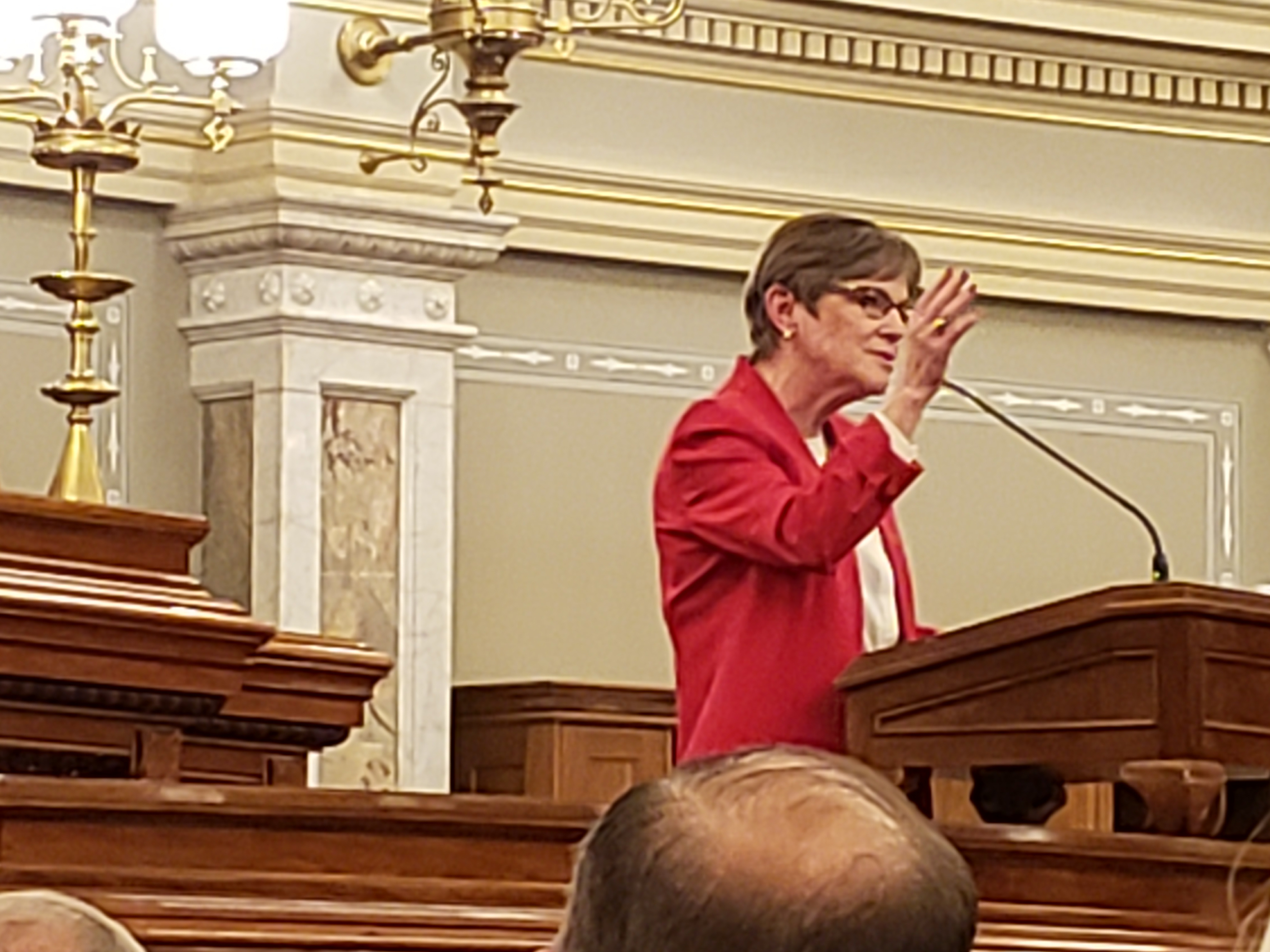 Hello from Agra!  We are ready to begin the second half of the 2019 Kansas Legislative session. At the time I am writing this column, we are at home in the district after having the local county farm bureau’s along with the Ellis stop co-sponsored by the City of Ellis and Ellis Chamber of Commerce on Friday.  It was good to see many constituents brave the weather to discuss topics important to them.  It was great to be at selected stops with Senators Billinger and Bowers also.

SB 9, hit the Governor’s desk on last Tuesday. This is the KPERS stabilization bill that was passed unanimously by both the House and the Senate. The Governor has 10 days to consider whether to sign, veto, or allow the bill to become law without her signature.SB 9 helps keep our promise to KPERS - the retirement system for our teachers and other public employees - by paying off a $115 million debt that the state owes to the retirement plan. SB 9 is in contrast to the Governor’s KPERS proposal, HB 2197, which would have generated $160 million in short-term cash for increased state spending but increased the state’s debt costs in KPERS by $7.4 million. HB 2197 was met earlier this session with resounding disapproval in the House.  The Governor’s plan failed on vote of 36-87 with both Democrats and Republicans opposing the reamortization effort.

By passing SB 9 and rejecting HB 2197, we can protect funding for our retirees responsibly pay down the state’s debt and ensure that the next generation isn’t left to pick up the tab for today’s spending.

Before we broke for turnaround there were a few bills worked on the house floor:  On Wednesday, February 27th, the House passed HB 2006, a bill that makes significant changes to increase transparency in the state’s economic incentives.  On a vote of 122-0, the House overwhelmingly approved of the requirement for the Department of Commerce to develop an online database for the purpose of disclosing data on economic development incentive programs.  This would include any economic incentive program that is administered by the department, and also includes any tax credit program except for social and domestic credits.

This bill would make economic incentive data readily and easily available and would allow the public to know how their tax dollars are used, where they are used, and by whom they are used.  The database must be posted on the department’s website, and it is required that these programs be searchable by name, business, and county.  In addition, the history, goals, and purpose of each program would be disclosed, as well as the qualifications for such programs. The total amount of incentives claimed, received and distributed from/by each program, recipient (business), and county would also be public.  The bill also maintains the necessary confidentiality parameters regarding private taxpayer information.  Lastly, the Legislative Post Audit Committee would be charged with conducting a comprehensive analysis of each incentive to prove its efficacy every three years.

HB 2006 serves as a tool to hold government accountable.  This bill would install the necessary safeguards on the executive branch to prevent potential fraud and abuse.  Both policymakers and the public ought to know how many economic incentives are issued each year, and to what end have those incentives performed.  It encourages scrutiny but also ensures a greater effective use of taxpayer dollars.

Also, on Wednesday, February 27th, the House passed HB 2144, also known as the Community College Taxpayer Transparency Act, on a vote of 84-40.  Essentially, the bill would require community colleges to post information online concerning fiscal matters.  On each college’s website, the bill would require the posting of tuition rates, fees, cost per credit hour, percentage of students attending each campus, enrollment percentage of students residing inside and outside of the community college district, property tax revenues and mills levied over five fiscal years, and scholarship information.  This must be posted under an easily identifiable link on their respective websites.  The bill would also require imposed student fees, for specific purposes, by the community colleges to be spent specifically on those purposes.  Such purposes must also be outlined in their billing statements as well. Additionally, community colleges would be required to identify which of their offered courses are fully transferable to the Kansas Board of Regents (KBOR) four-year institutions.  KBOR and each colleges’ website must specify which particular courses are fully transferable. Property taxes are levied within a community college district to fund the local community college.  Requiring that these colleges post property tax information along with scholarship information, general credit hour costs and other information digitally ensures that taxpayer dollars are spent appropriately.  Disclosing the specific purposes of each student fee also guarantees this.  HB 2144 would also allow community college students and prospective students to verify which offered courses will afford them the opportunity to transfer to a Regents institution, should they decide to attend any of those institutions.  I still have some concerns about this issue and I am sure there will be some additions and subtractions when the Senate takes up the measure.  Transparency is a good thing we just need to make sure there is context to the numbers or it is anyone’s guess how the numbers could be used to make a positive or negative impact.

Last week we talked a little about SB 22.  Right now, the state budget is set to raise taxes on certain Kansans. If we do nothing, the Governor’s budget will trigger a tax increase on Kansans who itemize their mortgage interest, property taxes or medical expenses as well as on several of the state’s largest employers. Governor Kelly’s plan would keep the federal dollars intended to be returned to Kansans under recent federal tax cuts and instead use those dollars to fund unsustainable state spending increases. Senate Bill 22 would adjust the Kansas tax code to address the changes at the federal level so Kansans can continue to itemize and so that employers are not hit with a tax hike on income that has historically never been taxed at the state level. While the governor campaigned on reducing the sales tax on food, her budget keeps the Kansas food sales tax among the highest in the nation and provides no relief for Kansans at the grocery store.  SB 22 would reduce the food sales tax by 15% and give help to working Kansans every single time they go to the grocery store. Some say a penny isn’t that much, but to borrow a line: “a little bit goes a long way every week.”  SB 22 also closes a glaring loophole that punishes businesses on Kansas’ Main Streets. For too long, this loophole has put our local businesses at a disadvantage when they’re trying to compete with out-of-state businesses. That loophole is the one that makes Kansas businesses collect sales taxes when they sell online but leaves out-of-state businesses free to scoff at our laws. It also makes Kansans personally responsible for collecting their own sales tax on behalf of those out of state tax cheats.  This bill closes that loophole and stops penalizing Kansas businesses and Kansas customers. It places the burden to collect and pay taxes on the out of state businesses who have had an unfair leg up on our local mom and pop shops. The bill also removes the line for out of state sales tax from Kansas taxpayers’ forms so it’s crystal clear that Kansans are no longer tax collectors for other state’s businesses.

Winter sports season is wrapping up and congratulations to those students who competed in wrestling and basketball.  We have a couple of teams playing in the state tournament and a couple that came very close.  Overall, with the challenges we have dealt with because of the weather, I think all of us are looking for the warm weather that track and field season brings.